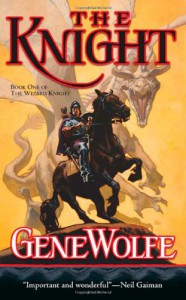 Told in the form of a letter from a younger brother to his older brother. The boy has been transported from America to a mysterious land, similar to that of the Norse myths.
He explains all the things that have happened, travelling between the different worlds of Mithgartr and Aelfrice, meeting elves, lords, giants and more humble people.
He learns a lot about himself and others along the way, finding his one love (and losing her again) on a quest for a magic sword.
The only name he uses from the outset is Able of the High Heart, that was given to him as he first came to in this land, but the story flows as he tries to remember things, occasionally jumbling them up, but it matches the character well.

The novel comes across as a cross between The Broken Sword (Poul Anderson) and Stardust (or several other Neil Gaiman novels).
Tweet