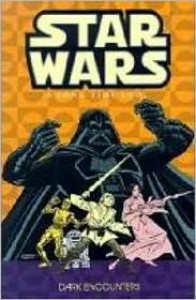 I remember reading these as comics when I was younger. Marvel had first done a serialisation of A New Hope, then carried on adding their own adventures for the series. This collection ends at the point where Empire Strikes Back was coming out and they were due to start the comics for that.

This book introduces some new baddies in the form of the Tagge family/business as well as Darth Vader and Jabba the Hut (one "t").
This was at a stage where Jabba hadn't been defined as a character by George Lucas, so the Marvel team made him a yellow furry humanoid.

Luke still has the hots for Leia at this point, and him and Han are always trying to impress her.

Most of the artwork is really crisp and bright (drawn by Carmine Infantino & Bob Wiacek) - one story illustrated by Mike Vosburg seems to detract from the rest of this collection.

Overall, a good dose of nostalgia for people who read these originally, and an interesting look at Marvel's take on expanding the universe.
Tweet